Tim Ahlman shovels snow outside his home in Bellemont, Ariz. Monday, Jan. 25, 2021. A series of winter storms have dropped more precipitation in Flagstaff than the city had during last summer's monsoon season. The recent snow measured as water topped the amount of rain that fell from mid-June through September, the driest monsoon season on record. (AP Photo/Felicia Fonseca)

PHOENIX – The storms that pounded Arizona’s high country with snow and dropped heavy rain across the deserts were welcome, but the state still has a deep drought deficit, a climate expert said.

The first major rainfall of the year in metro Phoenix averaged .04 inches from Monday through Tuesday but snow fell in eye-popping numbers up north with up to 40 inches in some parts.

“The storms will take the edge off of this drought but won’t erase the longer-term deficits that we have stacked up over the past nine months,” University of Arizona climatologist Mike Crimmins told KTAR News 92.3 FM.

But almost 95% of the state is in extreme or exceptional drought after the hottest and driest summer on record followed by a dry and warmer than usual fall.

The snow in the upper elevations “will be good to help recharge soil moisture over the next couple of months,” Crimmins said. “This is pretty well-timed precipitation.”

Crimmins added he had worried La Nina conditions – the cooling of Pacific Ocean waters that typical bring drier winters to the Southwest – would affect chances of rain here.

“[But] if it really dries out and warms way up in March and April, it may set us way back again,” he said.

Crimmins also believes the recent storms will help with fire danger later in the spring, but it’s too early to tell.

Arizona had one of its worst fire seasons on record last year with more than 950,000 acres burned. 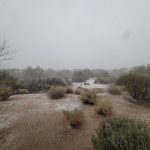 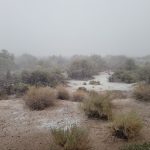