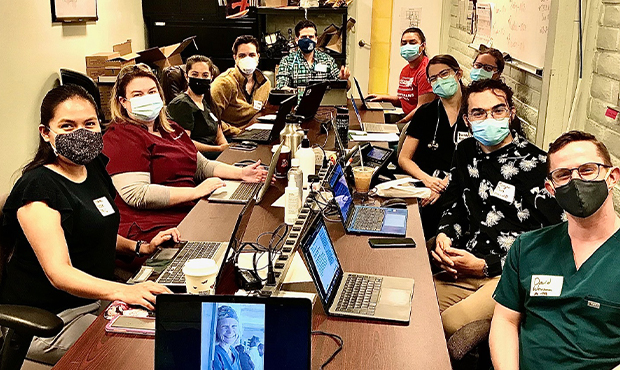 Volunteers at Peacework Medical Clinic in Phoenix provide free medical care for transgender patients who are in the country without legal permission. The estimated 1.4 million adults in the U.S. who identify as transgender face obstacles to getting health care, because of discrimination and the lack of medical professionals who themselves are transgender. (Photo courtesy of Josef Burwell)
(Photo courtesy of Josef Burwell)
Share

PHOENIX – When Coree Pledge decided to transition from female to male 11 years ago, he couldn’t find a doctor providing hormone replacement therapy in his hometown of Mobile, Alabama. So he drove six hours, one way, to find care in Atlanta.

“After about a month of calling and research is when I focused on Atlanta and knew that would be my best option,” said Pledge, who now lives in Phoenix. “That was in 2009. I would be surprised if much has changed since then, but hopefully there are more doctors in the Deep South providing HRT.”

Yet even today, obstacles to care remain for the estimated 1.4 million adults in the United States who identify as transgender – in large part because of the lack of medical professionals who themselves are transgender and the discrimination patients face from other practitioners.

Less than 1% of U.S. medical students identify as transgender or gender nonconforming, according to a 2019 survey by the Association of American Medical Colleges.

In its latest study of discrimination toward transgender people in the U.S., the National Center for Transgender Equality found that one-third of those surveyed reported at least one negative experience with a health care provider. Rates were higher among transgender people of color and those with disabilities.

Negative experiences included being refused treatment or facing verbal harassment or physical or sexual assault, or having to “teach” the provider about transgender people to get appropriate care.

Josef Burwell is a physician assistant and the founder and director of Peacework Medical, a free clinic in Phoenix for LGBTQ patients who are in the country without legal permission. He is also a transgender man.

Burwell has worked in the medical field for more than 20 years, and traveled to Haiti, Honduras and Cambodia to help those in need. He moved to Phoenix in 2015 after hearing about the mistreatment of transgender women of color who had been detained at the U.S.-Mexico border.

Burwell and his volunteers provide primary care for nearly 200 patients who want surgery or treatment for gender transition or require other medical treatment.

Burwell has heard health care workers say it’s hard to treat transgender patients because they can’t relate to them, but he said that excuse doesn’t fly.

“I treat many people with diabetes and hypertension and broken legs and sprained ankles … and I don’t need to have these things to treat them,” Burwell said. “And so why are people so resistant at times to treat gender-nonconforming people or people who have gender dysphoria? I don’t understand the resistance.”

When Burwell began transitioning, he was working as a physician assistant in a war zone in Iraq. During the first year or so of his treatments, he recalled, people working below him did not know whether to say “Yes, sir” or “Yes, ma’am.”

He felt lucky that he was working in a position of authority and that his boss at the time was supportive. But for that, his experience would have been very different, Burwell said, “because acceptance in the military, and anywhere, comes from the top down.”

Dr. Rachel Levine, a transgender woman who is secretary of health for the commonwealth of Pennsylvania, said it’s important for LGBTQ people to see LGBTQ physicians, public officials and others in professional positions because it helps them feel seen and accepted.

When Pledge moved from Alabama to Arizona, the first clinic he went to in Phoenix was primarily a treatment center for HIV and AIDS that also happened to specialize in transgender health care.

Because Pledge did not have health insurance in 2009, he had to find ways to apply for coverage. That included continuing to identify as female and using his birth name.

That was a time when some insurance plans considered a prior diagnosis of gender dysphoria or gender identity disorder to be a preexisting condition.

A 2016 rule added to the Affordable Care Act aimed to prevent denial of coverage based on transgender status by more broadly defining what constitutes discrimination based on sex and gender. The Trump administration stripped those protections earlier this year, but a federal district court in New York has since issued an injunction prohibiting repeal.

Advocates, meantime, continue to push to increase the number of transgender students in medical school.

In a September column on the website of the Association of American Medical Colleges, Lala Tanmoy Das, co-president of Q! Queer Health Alliance, called for actions that include: admissions offices doing more to feature transgender medical students and doctors in brochures, and medical schools utlizing pipepline programs that aim to improve ethnic diversity to recruit more transgender people.

“As medical institutions, we need to do better,” Das wrote. “While the road ahead will be long, we can catalyze change by inspiring more individuals to apply and matriculate into medical school.” Sports betting in Arizona opened a new world to young adults, one where putting down money on games was as easy as sending a text message.
Close
Transgender patients face battle for care amid bias, doctor shortage