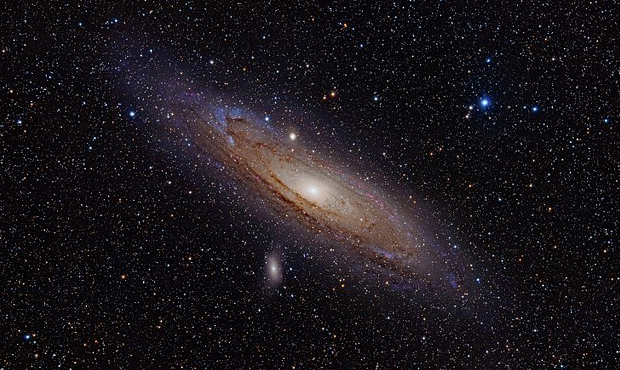 Andromeda Galaxy, 2.5M light years away from Earth, is in view now

By now I am sure that you know that we live in an amazing galaxy known as the Milky Way. Some 105,000 light years from side to side, with well over 200 billion stars.

We are located only 27,000 light years from the galactic center and go around the center once in some 225 million years – quite amazing stuff!

In the known universe since the Big Bang event (13.5 billion years ago), astronomers believe that there are at least 2 trillion – that’s 2,000 billion – galaxies in the cosmic soup.

That a lot of galaxies!

Here on Earth and in Arizona, we get to view one of the most amazing galactic objects known to mankind – the great Andromeda Galaxy.

Andromeda is one of the largest and nearest of the major galaxies which harbor around the Milky Way.

First observed with the naked eye, around 964 A.D., by Persian astronomer Abd al-Rahman al-Sufi. He described the object as a “nebulous smear.”

In 1612, astronomer Simon Marius described the galaxy as the “Little Cloud” on his star chart of that era.

Here is an image of the Andromeda Galaxy as viewed from Earth.

With the advent of modern telescopes and science, the Andromeda Galaxy is now known to be some 2.5 million light years from us.

Think of that for just a moment – the light that you see from this massive galaxy left the stars of Andromeda 2.5 million years ago and got here in October of 2020.

Thought to contain well over 1 trillion stars, this galaxy is larger than our Milky Way.

Let’s now look at how to find this celestial treat in our preHalloween skies!

Located high in the northeastern sky around 9 p.m. Arizona time, the Andromeda Galaxy fits right into the ancient constellation of Andromeda, the daughter of Cassiopeia and Cepheus.

Here is a basic finder chart for the constellation and the galaxy.

On a dark and moonless night, M31 is quite easy to see in a pair of binoculars and of course, best in a telescope.

The galaxy can actually be seen with the naked eye at the best of dark sky sites. Imagine viewing this object with just your naked eye – 2.5 million light years distant.

The true size of the galaxy in terms of its angular diameter is even more impressive. The galaxy is actually larger than the apparent size of the moon in our sky.

Here is an example.

When you view the Andromeda Galaxy in binoculars or a small telescope, you are really viewing the nucleus and not the fainter spiral arms, etc.

To add to the incredible size of this galaxy in our skies, astronomers have detected a giant bubble of gas surrounding this already massive galaxy.

Here is more on this story.

This is just how far the bubble of gas extends from the Andromeda Galaxy.

Finally, the Andromeda Galaxy and our Milky Way will actually collide in a few billion years and smash into us and create a massive galactic structure known as the Milkomeda.

That event is seen here in a simulation:

Here is a detailed finder chart for locating the Andromeda Galaxy.