Bighorn Fire near Tucson containment increases to 33% with no growth PHOENIX – The Bighorn Fire has consumed 58,553 acres of southern Arizona’s Catalina Mountains as of Monday night and is 33% contained, according to fire officials.

The fire didn’t gain any ground on Monday, but the containment increased from 16%.

The Bighorn Fire is currently the third largest fire burning in the United States.

The communities of Oracle and portions of Golder Ranch are placed on “set” alert status, letting residents know they should be prepared for a possible evacuation order.

Catalina Foothills and Oro Valley are also on notice for potential evacuations.

An evacuation center has been opened at Sahuaro High School in Tucson.

As of Monday, there have been no homes lost in the fire.

There have been five minor heat-related illness reported.

An interactive map of the Bighorn Fire alert zones can be found online.

Catalina State Park is closed because of the fire, and portions of the Coronado National Forest Santa Catalina Ranger District are restricted.

More than 300,000 acres of private, federal and tribal land in Arizona have been burned by nearly 1,000 fires this year. 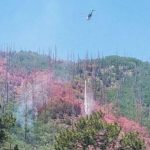 Historically, patients underwent acute stroke treatments according to strict time guidelines. But thanks to recent advancements in stroke research, more patients are becoming candidates for clot-busting drugs and endovascular therapy at specialized centers like Barrow Neurological Institute.
Close
Bighorn Fire near Tucson containment increases to 33% with no growth