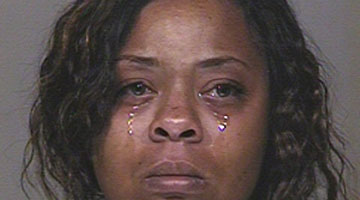 March 20 was supposed to be the day Shanesha Taylor’s luck turned around. Instead, it became the worst day of her life. She was arrested on child abuse charges after leaving her children unattended in her SUV while she was on a job interview. Shanesha Taylor’s mug shot went viral within hours.

Now, for the first time since that day Taylor has spoken, granting her first interview to the New York Times.

The mother of three (her 9-year old was in school) had an interview scheduled with Farmers Insurance in Scottsdale that day. The job was for an insurance broker and it would have allowed her to provide for her family.

The job’s starting salary was, “thirty-nine thousand the first year” Taylor told the Times, “$65,000 the second year, $89,000 the third year and the fourth year, with proper work, I could have had my own agency.”

It was the break she needed. Like so many others, the recession was hard on her. Taylor had quit her job as a mortgage loan officer after her grandmother died in 2008 to “regroup.”

But she never regained her economic footing. She spent down her savings, only to find that the customer-service and phone-sales jobs for which she qualified were paying less than before and were harder to come by. “I had to downgrade to an apartment; it got difficult paying day care, apartment, car payments, insurance — all the basic needs in life,” she said.

From there it was a bunch of $10-an-hour jobs, not enough pay to make ends meet. Then came the call from Farmers.

Taylor was living with her parents, who both had to work the day of the interviews, Taylor arranged for a babysitter.

The drive was 35 miles. Taylor scrounged enough gas money together by asking strangers in a Walmart parking lot. She was determined to get this job.
The day of the interview, Taylor drove to her babysitter’s house. She knocked on the door but no one answered. Panic started to set in. She needed this interview, she needed this job.

“I felt like this was my opportunity to basically improve life for all of us, and the one key part of it is now not available, so what do I do now?” Ms. Taylor said. “That was my only thought: ‘What do I do now? What do I do now?’ That was kind of what started the whole chain of events that day.”

What she did was drive to Scottsdale with her kids in tow. She decided to take the chance and leave her 2-year old and 6-month old in the car. It was worth the risk, she thought. It was 71 degrees outside and she’d only be a little while.

Taylor was inside the insurance office for 70 minutes. She thought the interview went well.

“Walking out of the office, you know that little skip thing people do?” she said, clicking her heels together in a corny expression of glee. “I wanted to do that.”

Until she saw the cops and the emergency workers. The doors of her 2006 Dodge Durango were open. Her children were not there, instead they on the way to the hospital to be treated after temperatures reached over 100 degrees in the car.

Hours later, Ms. Taylor was posing for a mug shot, her face somber and composed, a rivulet of tears falling from each eye.

The mug shot. That mug shot. It was the picture that started the debate over Shanesha Taylor.

But then there are the kids.

Then came the backlash, as critics contended that a woman who had put her children in peril was being made into a hero. Bill Montgomery, the Maricopa County attorney, contradicted news reports that Ms. Taylor was homeless and unemployed, saying she was actually neither. Her children — she also has a 9-year-old daughter who was in school at the time of the job interview — were removed from her custody.

In addition to having her children removed from her home, Taylor was charged with two counts of felony child abuse. She’s already spent 10 days in jail.

She was freed after anonymous donors paid her $9,000 bail. Others took pity on Shanesha Taylor and raised $115,000 through a crowd-sourced charity. The Times said she’s used the money to rent a three-bedroom home to eventually provide for her children.

Taylor has also reunited with the children’s father, Antoine Duncan. He’s has had his own employment struggles, living off a job that pays him $10 an hour. The couple has started counseling. Taylor said she realized

“This is one of those eye-opening situations that makes you feel like that there are some things that are bigger than yourself, so sometimes you have to learn to communicate in order to make life better because, I mean, I understand that a two-parent household is better than a one-parent household, and they love their dad to death; it’s ‘Daddy’ all day. So it’s letting go of your own notions of how things are supposed to go.”

She now has to see her children under supervision. It will continue that way for a while. Taylor’s next court hearing in July.

“All at once, Ms. Taylor had become a symbol of both economic desperation and shirked responsibility,” wrote the Times.

It’s true: Taylor is a sympathetic figure. She’s a single mom trying to make a better life for herself and herr children. No one can fault her for that, but there’s never an excuse to leave children unattended in a vehicle, especially in the Valley.

There have been various punishments handed down for parents who left their children in hot cars. The truth is not many parents that do this serve jail time.

Daniel Gray’s 3-month old son died last summer after he left him in a hot car to go smoke pot with his co-workers. Unfortunately, he seems to be the exception. Gray received a four-year sentence.

Catalina Clouser avoided jail time after leaving her 5-week old son on the top of her car after smoking weed at a friend’s house. The car seat fell off and the child was found unharmed in a Phoenix intersection. For that Clouser will spend the next 16 years on probation.

Sometimes, parents aren’t even charged after their children die in hot cars. Grand juries in the Valley decided not to return indictments against Ashly Duchene and Kyle Brown after they both left their 3-month olds in their cars during separate incidents. Both children died.

Thankfully, Shanesha Taylor’s children are healthy. She made the biggest mistake of her life and she’s paying for the consequences now. Over the next few months, she’ll will have to prove she’s a fit and worthy mother in order to regain custody of her children. That will be a long battle, one it seems she’s willing to fight every day.

She does deserve some sympathy, however, a message still has to be sent. Leaving children unattended in a car, no matter the reason, is unacceptable. Throwing this mother in jail for years and years is not the best way to send that message either because three children will grow up with their mother behind bars.

Next month, Taylor will get a chance to prove she’s made positive changes in her life. If she can continues to move in the right direction give her a sentence like the one Catalina Clouser received.

Put Taylor on probation for the next 17 years, until her youngest child turns 18 and if she fails, she should suffer severe consequences.

Picking which streaming services to subscribe to are difficult choices, and there is no room for internet that cannot handle increased demands.
Close
Months after leaving kids in hot car, Phoenix mom Shanesha Taylor opens up to NY Times