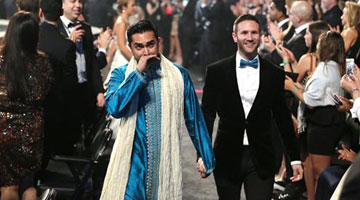 The biggest headline out of the Grammys broadcast Sunday night was the wedding.

Thirty-four couples got married during Macklemore and Ryan Lewis’ song “Same Love,” which is about same-sex marriage.

There were same-sex couples, mixed-race couples and couples of all ages who exchanged vows during the performance.

It got me to thinking that maybe, for my kids, especially my 10-year-old, maybe gay marriage will just be known as marriage.

It’s quite a concept, isn’t it? That for kids today, the concept will simply be “marriage”, not “same-sex marriage” or otherwise.

I see it as an improvement, if only in semantics. It’s like this: When General Motors hired its new CEO late last year, the headline was “GM hires female CEO.” I applaud the fact that they hired a woman. I hate that it is still so unusual that her gender is as much a news story as her experience or education.

The fact that same-sex couples usually use the word “partner” stigmatizes them in much the same way.
I can’t wait until WHAT kind of marriage you are in is not part of the story anymore, except that maybe it’s a good one.

So often, it’s music that opens people’s hearts and minds. So often, what we hear on the radio is what’s going on in our homes and in our day-to-day lives.

My kids know same-sex couples and know that mom and dad are cool with that. But for kids whose parents maybe aren’t so comfortable, the fact that pop culture is OK with it may make it easier for them to accept.

They sure wouldn’t judge if they weren’t taught to do so.
Thankfully, pop culture has enough examples for kids whose parents haven’t figured that out.

Picking which streaming services to subscribe to are difficult choices, and there is no room for internet that cannot handle increased demands.
Close
Final Word: Grammys’ mass wedding with same-sex couples is hopeful sign