Wildfire northeast of Scottsdale grows to around 2,000 acres A lightning strike sparked the Verde Fire on Saturday night after thunderstorms rolled across Tonto National Forest and the surrounding area, Carrie Templin, a spokeswoman for the Forest Service, said in an email.

The most recent measurement, which was completed Monday morning, placed the size of the fire at 1,960 acres. It had been about 200 acres Sunday morning.

The blaze was eating through grass and brush in an area that fire crews can’t easily access, Templin said.

Helicopters and air tankers were dispatched to douse the flames and keep the fire from inching closer to communities to the west and south, including Rio Verde and the Fort McDowell Reservation. Smoke was visible from parts of the East Valley, Fountain Hills, Rio Verde and along the Fort McDowell-State Route 87 (Beeline Highway) corridor.

As a precaution, forest service roads along SR 87 were closed to keep people from venturing into the Lower Sycamore, Sugarloaf and Mesquite areas. 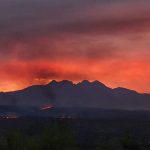 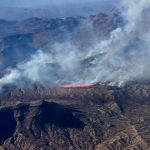