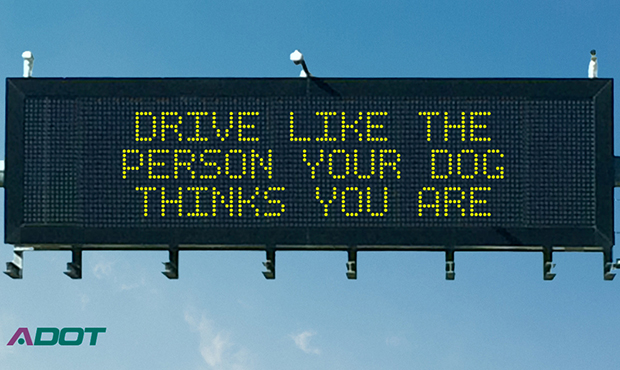 The Arizona Department of Transportation announced the winners of its annual safety message contest Friday.

Mitzie Warner of Chandler submitted one of the winning messages, “Drive like the person your dog thinks you are.”

“Dogs see the best in us,” Warner said in a press release. “If we all drove like the people they believe us to be – a little nicer, a little more courtesy – it’d be much better.”

Here are the winners in the Safety Message Contest! These will be on overhead signs through Sunday evening.

David Posey of San Tan Valley contributed the other, which was “Drink & drive? Meet police and see new bars.”

“I just want everyone to know with all the options we have out there today, like Uber and Lyft, there is no sense in risking hurting someone else or yourself,” Posey said in the release.

The messages will both be displayed on signs throughout the state this weekend.

“These messages are wonderful and because the public invested their time into voting for their favorites, hopefully they carry a little more meaning and driver’s will take the messages to heart when they see them this weekend over Arizona’s highways,” ADOT Director John Halikowski said in the release.

“Even as a cat owner, I can appreciate the sentiment of wanting to live up to being the people our pets believe us to be.”