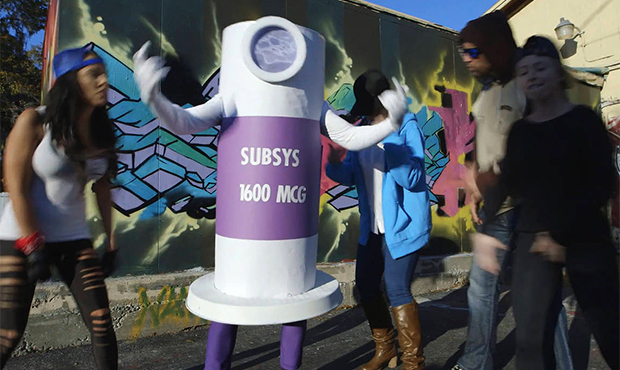 This still image from a 2015 video presented as evidence by the U.S. Attorney's Office in federal court in Boston on Wednesday, Feb. 13, 2019, shows a scene from a rap video made to motivate Insys Therapeutics sales representatives to get doctors to prescribe higher doses of the company's highly addictive fentanyl spray. (Insys Therapeutics/U.S. Attorney's Office via AP)

PHOENIX — Arizona reached a settlement with a former Chandler drug company executive who was accused of bribing doctors into prescribing a powerful painkiller.

The attorney general’s office reached the $9.5 million settlement with Alec Burlakoff, the former vice president of sales for Insys Therapeutics.

“Individuals like Alec Burlakoff used unlawful business practices to earn millions of dollars and to fan the flames of opioid addiction,” Attorney General Mark Brnovich said in a statement.

“This ‘profits-over-patients’ attitude has had a devastating impact on individuals and families throughout this state.”

The state filed a consumer fraud lawsuit against Burlakoff and others with the opioid manufacturer in 2017.

The lawsuit alleged that the company paid doctors “speaker fees” in exchange for writing prescriptions for Subsys, a fentanyl spray meant only for cancer patients with severe pain.

As part of the settlement, Burlakoff admitted to unlawfully using Insys’ speaker program to compensate doctors for writing the prescriptions.

He also said he targeted doctors for the program who expressed a willingness to write the prescriptions for payment.

Burlakoff will also be force to disgorge $5.2 million in Insys stock and pay another $4.3 million in civil penalties.

The attorney general’s office litigation against Insys is ongoing.

Burlakoff pleaded guilty in November to racketeering conspiracy and is testifying against his former colleagues for a chance at a lighter sentence.

He testified last month that Insys employees were clear with physicians about their expectations for prescriptions in exchange for speaker fees.

A doctor who didn’t have any ethical problems with it and agreed to the deal was called a “whale,” he said.

“I knew that every dollar I spent was going to be tracked and that the expectations on return on investment, on dollars back to the company, were very high,” Burlakoff said.