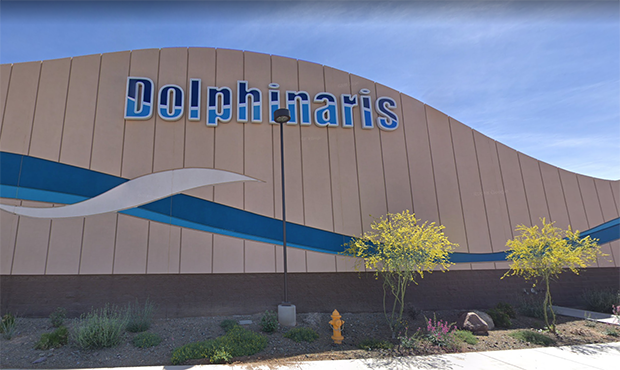 PHOENIX — Dolphinaris Arizona, the controversial aquatic facility in Scottsdale where four dolphins have died in less than two years, is not closed, according to a spokeswoman, even though signs at the business have been taken down.

The facility closed two weeks ago to allow a panel of experts to evaluate the facility after 22-year-old Kai died on Jan. 31.

Smith told the wire service that the signs were taken down at the facility on Salt River Pima-Maricopa Indian Community tribal land near the Loop 101 and Via de Ventura to avoid confusion.

After 4 dolphins died @dolphinaris_az they officially took down their signage from the building this afternoon. This is what’s left. pic.twitter.com/sqZix41eNl

There is no target date for reopening the facility, she added. It opened in October 2016 amid protests.

In May 2018, Alia, a 10-year-old female dolphin, died after suffering from an acute bacterial infection.

In September 2017, a 7-year-old male named Bodie died of a fungal infection, according to the National Oceanic and Atmospheric Administration. Dolphinaris initially reported that he died from a rare muscle disease.

After more than two years of battle with an invisible killer, we can now vaccinate the youngest among us against COVID-19. This is great news.
Close
Dolphinaris Arizona isn’t permanently closed, despite lack of signage