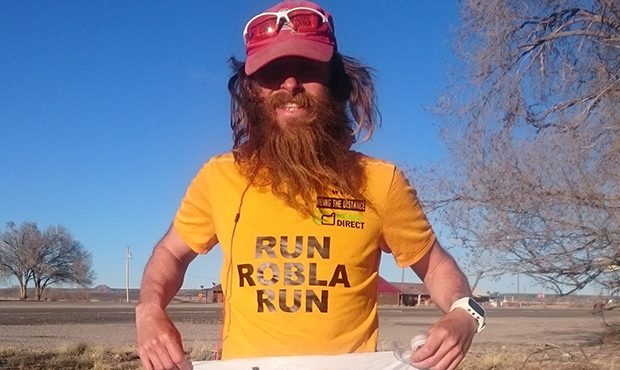 PHOENIX — A 200-mile stretch of roadway that begins in Flagstaff is all that separates a British man and his goal of running the same legendary route as Tom Hanks’ character in “Forrest Gump.”

“I know what the dream ending is, which is what we’re approaching,” Rob Pope told Today. “The gravity of it all is being cushioned by the fact that I still have a little bit left.”

Pope, 39, planned to start the final leg of his run at the defunct Twin Arrows Trading Post near Flagstaff and end in Monument Valley, just like Gump did in the 1994 film. He was expected to cross the final finish line on April 29.

The trading post played a small part in the film. It was thought to be the place where Gump gets splashed with mud and, when wiping his face, gave someone the idea for the “Have a nice day” shirts that were popular in the 1990s.

While Gump managed his 15,248-mile run in three years, two months, 14 days and 16 hours, Pope has covered more distance in just one-third of the time in four stages.

He began his quest — which he had talked about doing for 15 years prior — in Gump’s home of Mobile, Alabama in 2016. He was wearing chinos, a plaid shirt and Nike Corsicas, just like Gump.

Since then, he has grown his hair out and donned a Bubba Gump Shrimp Hat, just like the title character.

Pope told Today that the people he has met along the way have been some of the best experiences.

“There’s such amazing scenery, but it’s the two-legged encounters that have really stuck in my mind,” he said. “I think the ‘Forrest Gump’ thing really helped break the ice.”

The Liverpool resident could have ended his run earlier, but went home to be with his girlfriend, who gave birth to a daughter. He wanted them to both be at the finish line when he crossed it.

This time yesterday we welcomed the beautiful Bee Catherine Pope into the world and our lives. I, as well as the attendant staff were amazed at how ridiculously well Nadine Strawbridge dealt with everything. I am unbelievably proud of her in every way and we are both very much in love with our little girl. For the statisticians amongst you, she weighed just under 8lb 1oz and started to indicate an appearance 30 minutes into her due date. White smoke was seen to emanate from the chimney at Liverpool Women's hospital, as the assembled crowds gathered exclaimed "Habemus Papam!" (We have a Pope!). Thank you to all the wonderful staff who are looking after us, a testament to the ongoing excellence and importance of our NHS. For the runners amongst you, she's got strong legs and neutral arches 😀 #baby #Bee #Pope #girl #nhs #birthday #love www.goingthedistancerun.com #running #run #runner #runnersofinstagram #runchat #runultra #ultra #ultrarunner #ultrarunning #USA #transAmerica #instarunners #fitness #getoutdoors #road #WWF #peacedirect #Nike #goingthedistance #keepgoing #Forrest #Gump #forrestgump

Pope has used the run to raise about $30,000 for Peace Direct and the World Wildlife Fund so far.

However, while the runner said numerous people had reached out about his run, there was one person he still hoped to hear from before he hangs up his shoes: Hanks himself.

Pope said he hoped the actor would greet him at the finish line. Maximize your retirement savings with guaranteed fixed rates up to 4.30%. Did you know there is a financial product that can give you great interest rates as you build your retirement savings and provide you with a paycheck for life once you retire? It might sound too good to be true but it is not; this product is called an annuity.
Close
Final leg of British man’s 15K-mile ‘Forrest Gump’ run to start in Flagstaff