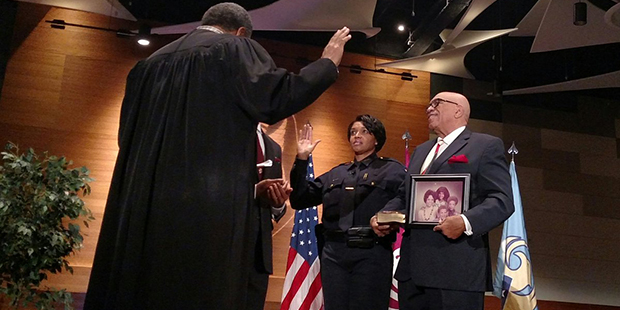 PHOENIX — Phoenix Police Chief Jeri Williams is returning to the place she started her career, and she has made it a priority to engage with the city’s community.

Williams said a vast majority of Phoenicians trust and engage with police, but she said there is a part of the population that does not trust law enforcement.

“I welcome those people to meet; I welcome that dialogue,” Williams said. “We are so much more alike than I think we are different because, the bottom line is, everyone wants to feel safe.”

Before being sworn in as the first woman to run the Phoenix Police Department, Williams spent five-and-a-half years as the police chief in Oxnard, California. She said in Oxnard there was a great disconnect between the community and police.

“The way we mitigated that or balanced that was one community, one person, one contact, one organization at a time,” Williams said.

Before her time in Oxnard, Williams spent 22 years with the Phoenix Police Department. She was raised in Maryvale and earned a Bachelor’s degree from Arizona State University as well as a Master’s from Northern Arizona University. Her son, Alan Williams, currently plays for the Phoenix Suns.

“Some people say that you can’t ever come back home,” Williams said. “I think I’m the perfect of example of yes, you can come back home and work to make your community a safer place.”

So, your little one starts kindergarten soon. How exciting! You still have a few months before the school year starts, so now’s the time to make sure students-to-be have the vaccines needed to stay safe as they head into a new chapter of life.
Close
New Phoenix police chief wants to meet with those who distrust law enforcement