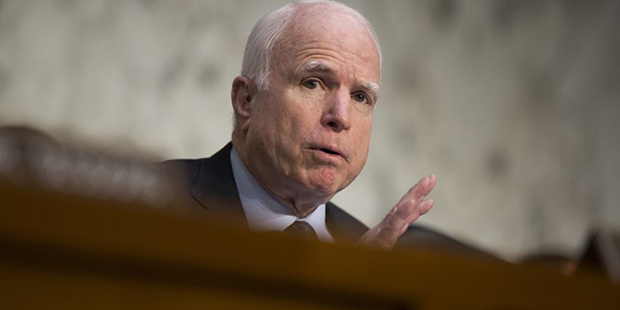 U.S. Sen. John McCain wrote the rules on dark money when he sponsored campaign finance reform, also known as the McCain-Feingold Act.  Now he’s using millions of dollars in dark money in a bid to hold on to his tightly contested Arizona seat.

An investigation into the various PACs supporting McCain brought to light some stunning conclusions.

First, the vast majority of McCain campaign donations are not from the Arizonans he represents but from people and corporations outside of Arizona with a vested interest in McCain’s continued support and votes for their interests.

When the issue of dark money first came up several years ago, The Arizona Republic blasted McCain saying, “Blame McCain-Feingold, not Citizens, for dark money” in its story explaining the negative effect McCain’s campaign finance reform law had on American elections.

In the 2010 Citizens United Supreme Court decision, even more dark money was allowed to flow into the election process. Since the decision, McCain has opposed efforts to restrict its influence and cut the stream of questionable donations.

Now McCain is taking advantage of that dark money to fuel his re-election bid in Arizona under the guise of a grassroots movement.

The McCain PAC and committee

There is also Arizona Grassroots Action, which is listed with the FEC as an unauthorized, independent PAC, meaning it can have no coordination or communication with the McCain campaign or The Friends Of John McCain committee.

The first indication there may be coordination, both use the same Alexandria, Va. address on their FEC filings.

There’s nothing grassroots about Arizona Grassroots Action, a Washington, D.C. PAC with over 85 percent of its money coming from out-of-state contributors.

Arizona Grassroots Action was created in 2014 to fund McCain’s purge of Arizona State Republican officers after his embarrassing censure by the Arizona Republican Party.

The contributor list to both McCain PACs is a who’s who of lobbyists, individuals and corporations that benefit from McCain’s influential role as chairman of the Senate Armed Services Committee, his various other committee assignments and his influence and vote in the Senate.

Other politicians who have received contributions from Wendt are Dianne Feinstein, Lindsey Graham, Mitch McConnell, State Democratic Parties, and numerous other politicians and PACs.

Other notable contributors to Arizona Grassroots Action and Friends of John McCain are:

In total, $8,053,250 was contributed to Arizona Grassroots Action and Friends of John McCain Pacs with only 13.7 percent being from Arizona contributors.

An astounding 86.7 percent was from out-of-state special interests.

Expenditures in support of candidate

The dark money rush into this year’s election is even more clouded by the ability of PACs to spend money in support, or in opposition of, a candidate without contributing directly to the candidate’s PAC.

One example of this is the $350,150 spent in favor of John McCain by the U.S Chamber of Commerce.

The chamber is a lobbyist group that actively lobbies senators and representatives on issues such as:

One of these PACs is called A Secure Arizona, which was founded in 2012, and terminated that same year, according to FEC filings.

Although this PAC doesn’t legally exist, it’s still updating its website, producing TV and web ads highlighting McCain, and even placed a $90,000 ad buy on Fox News for McCain ads in January this year.

A Secure Arizona’s connection to the McCain campaign became even more suspect when its former spokesman, Tyler Harber, was arrested and charged with illegal coordination between a candidate and campaign and sentenced to two years in federal prison.

During his sentencing, Harber told the judge, “I’m guilty — I knew it was wrong when I did it.”

According to Knoxnews, “Harber said he let his competitive nature get the best of him but that he was driven not by power but by his desire to win a political race.”

That isn’t the only shady dark money illegal PAC supporting McCain. A Secure Arizona is apparently working with another illegal PAC, Citizens For A Working America.

When DailyKos reported on the $90,000 Fox News ad buy it wondered:

“But who’s paying for it? Roll Call says it’s from a group called A Secure Arizona (whose website is about as unrevealing as they come), and the video itself is posted to a YouTube account with the same name. However, in the ads final frame, a written disclaimer says the spot was “paid for by Citizens for a Working America.”

The website is an even bigger joke, and a diligent Sunlight Foundation investigation into the backers several years ago turned up little.

Either way, this is a classic dark money expenditure that’s designed to be as opaque as possible.

A look at the FEC filings for Citizens For A Working America PAC show it has had zero contributions and one $10,000 expenditure in the past two years.

The sole expenditure was to Langdon Law LLC, which is the law firm of the PACs Treasurer, David Langdon.

Langdon was exposed by PublicIntegrity.org as the ‘dark money phantom‘ in a May 2015 article.

“Langdon is a critical behind-the-scenes player among the small army of lawyers working to keep secret the origins of millions of dollars coursing through the American political system. Thanks to his work, this unremarkable suburb is a home base for nonprofits and super PACs that pour millions of dollars into elections.”

Foreign governments even get into the game

In 2014, while McCain was praising Saudi Arabia on CNN by saying, “Thank God for the Saudis and Prince Bandar,” the Saudi Arabian Government was writing a $1 million dollar check to the McCain Institute.

The McCain Institute failed to publicly disclose the donation until last month.  When pressed by Arizona new station KPNX, McCain angrily denied any impropriety and, even went so far as to make the laughable claim he had nothing to do with the McCain Institute.

A Reality Check investigation revealed McCain’s connection with the institute to be extensive, from personally promoting the institute, hosting and participating in institute events and even personally hosting a yearly barbecue at his Sedona home for attendees of the McCain Institute’s yearly Sedona Forum.

McCain’s own legislation, the McCain-Feingold Act, revamped campaign finance rules in U.S. elections and it’s illegal for any sitting senator to accept donations of any size from foreign governments.

However, it’s apparently perfectly legal for a senator to receive a $1 million contribution to the “institute” in his name.

It must be nice to write the rules.

It’s no secret the American public is fed up with politicians who have greased the system to their own advantage.  McCain wrote the law allowing corporations, and special interest groups to donate millions of dollars to his campaign and its anonymous surrogates.

The money is used to aid in questionable ads attempting to harm his opponents reputations, for the sake of holding onto his seat, so he can vote for their best interests, not for ours.

The dictionary defines a “sellout” as, “a person who compromises his or her personal values, integrity, talent, or the like, for money or personal advancement.”

Perhaps McCain should change his name to “Sen. Sellout,” considering that is exactly what he has done to his constituents in Arizona. Meanwhile, he’s laughing all the way to the bank. Candidate’s abortion stance is significant for majority of Arizona voters

About six in 10 Arizona voters say a candidate’s stance on abortion will have a significant impact on their ballot choices.