KANSAS CITY, Mo. (AP) – Calls for Bishop Robert Finn’s resignation intensified a day after he became the highest-ranking U.S. church official to be convicted of a crime related to the child sexual abuse scandal.

Soon after a Missouri judge found Finn guilty Thursday of one misdemeanor count of failing to report suspected child sexual abuse to the state, unhappy Roman Catholics began discussing ways to get the bishop out of office on a Facebook page titled “Bishop Finn Must Go.”

Among the posts was one that listed contact information for the Vatican and urged parishioners to voice their displeasure with Finn at the highest levels. Pope Benedict XVI alone has authority over bishops. Through the decades-long abuse scandal, only one U.S. bishop has stepped down over his failures to stop abusive clergy: Cardinal Bernard Law, who in 2002 resigned as head of the Archdiocese of Boston.

Jackson County Judge John M. Torrence sentenced Finn to two years of supervised probation. If the bishop abides by a set of stipulations from the judge, the conviction will be wiped from his record in 2014.

“Now that our justice system says he’s guilty, he has lost his ability to lead our diocese,” Patricia Rotert, a Catholic church member in Kansas City, said Friday. “He’s lost his credibility. There is turmoil and angst around him and I don’t think he can bring people together.”

Finn’s attorneys would not comment on the bishop’s future in the church, saying it was a legal matter.

“The bishop looks forward to continuing to perform his duties, including carrying out the important obligations placed on him by the court,” Smith said in an emailed statement Friday.

Finn’s conviction comes four years after the church paid $10 million to settle 47 pending sexual abuse claims against the diocese and 12 of its priests. When announcing that deal in 2008, Finn apologized for the abuse that occurred at the hands of current and former clergy members, and promised that steps were being taken to make sure such abuse never happened again.

The diocese posted an update about the 2008 settlement on its website in June 2011 stating that Finn had written 118 letters of apology to plaintiffs or their families. That same month, Finn apologized for not responding to warnings the diocese received a year earlier from a parish principal detailing suspicious behavior by the Rev. Shawn Ratigan around children.

Instead of reading the memo and looking into the claims, Finn left it up to subordinates to handle the matter. He later admitted it was a year before he finally read a five-page document that a parish elementary school principal wrote detailing suspicious activities by Ratigan around children.

Finn also was informed of nude photos of children found on Ratigan’s laptop computer in December 2010, but instead of turning them over to police, Finn sent Ratigan to live at a convent in Independence, Mo.

Monsignor Robert Murphy turned the photos over to police in May 2011 _ against Finn’s wishes, according to court documents _ after Ratigan continued to violate Finn’s orders to stay away from children and not take any pictures of them.

Ratigan pleaded guilty last month to five child pornography counts, but hasn’t been sentenced. Prosecutors have requested he spend the rest of his life in prison.

Finn apologized again Thursday in court for the pain his failure to report Ratigan caused.

The bishop has avoided facing charges in Missouri’s Clay County, where Ratigan was charged, after reaching a settlement in November 2011. For five years, Finn must report to the Clay County prosecutor directly each month about any suspected child abuse in the diocese’s facilities in the county.

“I said for years that we wouldn’t be in the mess we were in today if about 30 bishops had said `I made a mistake, I’m sorry, I take full responsibility and I resign,'” said the Rev. Thomas J. Reese, a senior fellow at the Woodstock Theological Center at Georgetown University. “I think we’re at a state in the life of the church when a bishop is convicted of a misdemeanor, found guilty of not doing what he was supposed to do, I think he should resign for the good of the diocese and the good of the church.”

Support for Finn’s resignation is far from unanimous. Some say they agree he made a mistake, but it’s not one that should force him out, especially with even more stringent safeguards in place to protect children.

“I think people may walk away, but that’s their business,” he said. “If they think their children are any more safe in public schools, or in another church setting where people are working with youth, the data indicate they’re not. The Catholic Church in America is probably now today the safest place for children.”

While Finn is the highest-ranking Catholic official to be charged in the U.S. with shielding an abusive priest, Albany Law School professor Timothy Lytton said the June conviction of Monsignor William Lynn in Philadelphia broke the ice on criminal convictions against members of the Catholic hierarchy.

Lynn, who supervised other clergy as an aide to the cardinal, was convicted of felony child endangerment and became the first U.S. church official sent to prison for his handling of abuse complaints. He is appealing his three- to six-year sentence.

Still, Finn’s conviction is significant because it proves Lynn’s criminal prosecution was not an isolated event, but instead something that is likely to embolden prosecutors to go after church leaders who fail to protect children.

“Kansas City might mark a trend,” Lytton said. “It’s no longer good enough to just file civil suits; criminal justice may be much quicker to get involved. Kansas City normalizes this kind of reaction to the scandal.” Woman convicted of killing a woman to take her unborn baby

NEW BOSTON, Texas (AP) — A Texas woman was convicted of capital murder Monday for killing a pregnant woman to take her unborn baby. A Bowie County jury in northeast Texas deliberated about an hour before finding Taylor Rene Parker, 29, guilty of the October 2020 murder of Reagan Michelle Simmons-Hancock, 21, and the abduction […]

Romance scammer gets 25 years in prison for money laundering

ATLANTA (AP) — A Georgia man found guilty of laundering millions of dollars accrued by online fraud, including scamming vulnerable people on dating websites, was sentenced Monday to 25 years in prison. Elvis Eghosa Ogiekpolor was convicted earlier this year of one count of conspiracy to commit money laundering and 15 counts of substantive money […] 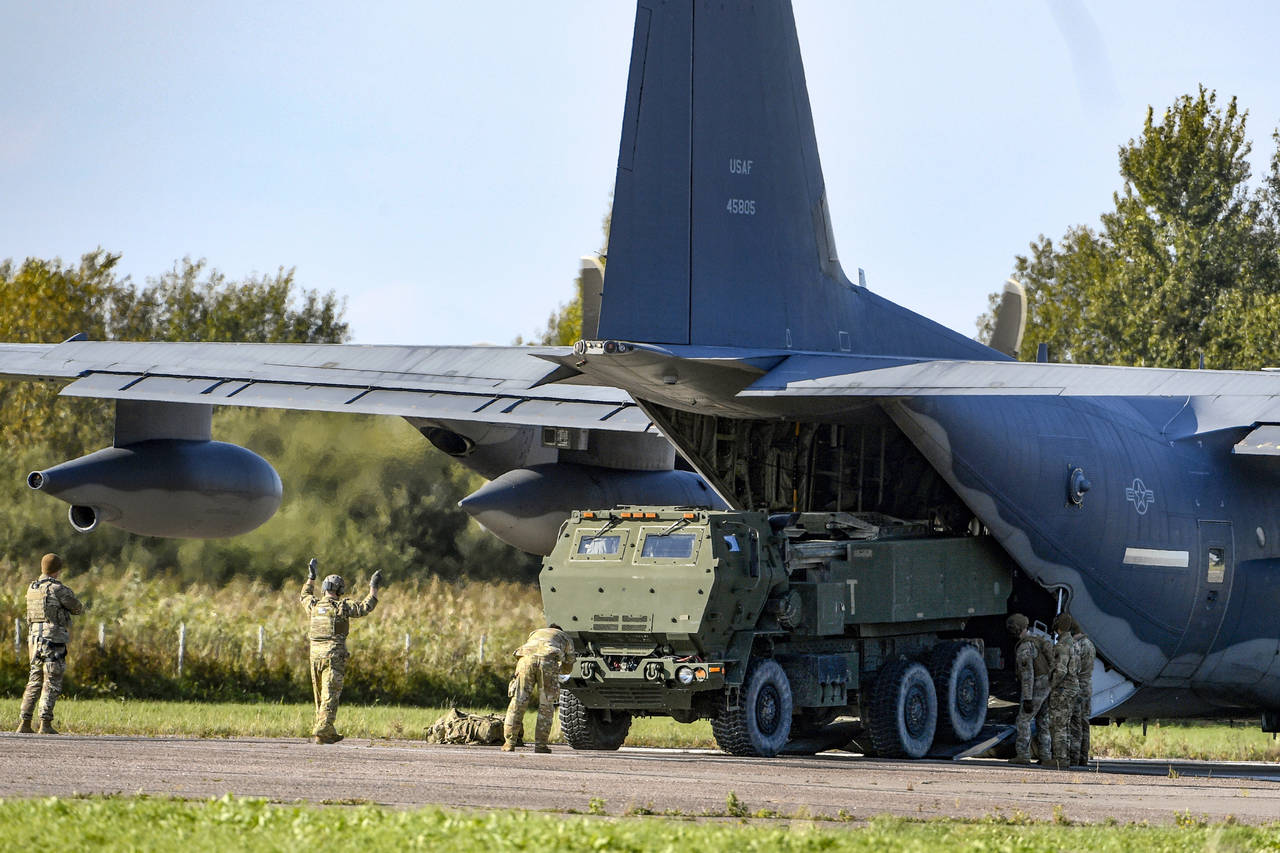 WASHINGTON (AP) — The U.S. will soon deliver to Ukraine four more of the advanced rocket systems credited with helping the country’s military gain momentum in its war with Russia. The High Mobility Artillery Rocket Systems, known as HIMARS, will be part of a new $625 million package of aid expected to be announced on […]

MINNEAPOLIS (AP) — Two of the four former Minneapolis police officers who were convicted of violating George Floyd’s civil rights during the May 2020 restraint that killed him are scheduled to begin serving their federal sentences Tuesday. J. Alexander Kueng and Tou Thao are scheduled to report to the U.S. Marshals Service on Tuesday morning. […]

RALEIGH, N.C. (AP) — North Carolina’s long-litigated photo voter identification law was appraised at the state Supreme Court on Monday. Justices heard arguments on whether it was reasonable for trial judges to throw out the law that they determined was tainted by racial bias and designed to help Republicans retain their grip on the legislature. […]

Condor Airlines brings passion to each flight and connects people to their dream destinations throughout the world.
Close
Bishop’s conviction intensifies calls to step down