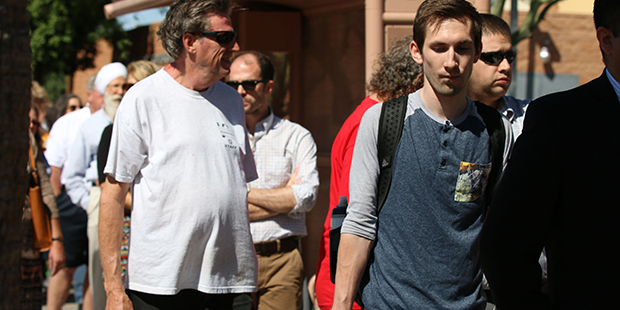 PHOENIX — The Democratic Party, along with the campaigns of Hillary Clinton and Bernie Sanders, plan to file a lawsuit over long wait times for voters in the Arizona presidential preference election.

The Washington Post reports the lawsuit will focus on Maricopa County, where some voters waited for hours to cast a ballot in the March 22 election, which awarded delegates candidates need to earn their respective party’s nominations.

Arizona’s “alarmingly inadequate number of voting centers resulted in severe, inexcusable burdens on voters county-wide, as well as the ultimate disenfranchisement of untold numbers of voters who were unable or unwilling to wait in intolerably long lines,” the lawsuit says.

Maricopa County Recorder Helen Purcell, a Republican, said her office decided to cut the number of polling places from the 200 opened in 2012 to just 60 in 2016 based on finances and the high number of mail-in ballots distributed.

The lawsuit will ask the U.S. District Court in Phoenix to review Arizona’s plan for polling places in the upcoming general election in November and policies that affect minorities’ access to voting.

“Arizona has a history of problems with guaranteeing the rights of their citizens to vote, and with this lawsuit we hope to stop it now in time for the 2016 general election,” said Marc E. Elias, the elections lawyer for Clinton’s presidential campaign.

The suit will be filed Friday by Elias on behalf of the Democratic Party and several Arizona residents. Once it is filed, both Clinton and Sanders’ campaigns will join the suit.

An attorney for Bernie Sanders, the other Democratic presidential hopeful, said last week the campaign will not contest the results of Arizona’s presidential preference election.

“We concluded that an election contest is too narrow and restricting a venue to address the widespread problems in Maricopa County that occurred on Election Day and disenfranchised tens of thousands of Arizona voters,” attorney Chris Sautter said.

The Justice Department is looking into the election as well to evaluate whether the largest county in the Arizona complied with voting rights laws.

Justice Department Voting Section Chief Chris Herren asked for information on 10 specific items, including a description of how county election officials determined how many polling places were needed on March 22 and whether potential impacts on minority voters were examined.

Pool renovations and kitchen upgrades may seem enticing, but at the forefront of these investments arguably should be what residents use the most. In a state where summertime is sweltering, access to a functioning HVAC unit can be critical.
Close
Democratic Party, candidates to sue Arizona over long wait times for voters